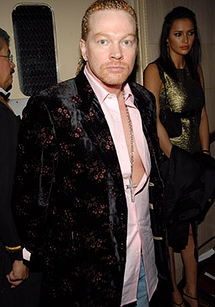 When Axl was 17 he fled Indiana on a Greyhound bus destined for Los Angeles (the haven for all that embodies sinnin' and grinnin'). After auditioning for a lion's share of punk bands (many of which he was turned down for because of his uncanny vocal resemblance to Robert Plant) he joined the seminal rock band L.A. Guns before ultimately forming Guns N' Roses. After Guns N' Roses met with the unprecedented success of their debut album "Appetite For Destruction", massive stadium tours soon became a reality, and Axl's status as a bona fide sex symbol was officially cemented. However, internal troubles with the band members and the heavy drug use among them eventually rendered Guns N' Roses obsolete until only recently. Comeback? We'll see.