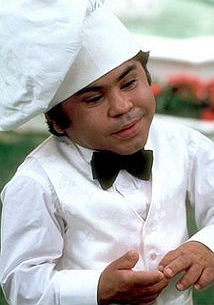 گالری ویدئوی Hervé Villechaize (0 ویدئو)
اضافه کردن ویدئو
سوابق کاری Hervé Villechaize
اضافه کردن اثر به سوابق Hervé Villechaize
بازیگر (5 اثر)
پنهان شدن
4.5
Two Moon Junction
رای شما:
0/10
(1988)
4
Forbidden Zone
رای شما:
0/10
(1980)
2.2
مردی با طپانچه طلایی
رای شما:
0/10
(1974)
0
Malatesta's Carnival of Blood
رای شما:
0/10
(1973)
5
دار و دسته ای که نمی توانست شلیک کند
رای شما:
0/10
(1971)
مشخصات Hervé Villechaize
مهارت‌ها
پنهان شدن
مهارت‌های فرعی: رانندگی
بیوگرافی / زندگی‌نامه Hervé Villechaize
Hervé Villechaize was born in Paris on April 23, 1943. He stopped growing very early and his father (who was a surgeon) tried to find a cure by visiting several doctors and hospitals. But there was none, so Hervé had to live with his small height and also with undersized lungs. He studied at the Beaux-Arts in Paris and made an exhibition of his own paintings, which were well received. At 21, he left France for the USA where he continued to paint and to make photographs. He also started to participate in some movies and was quickly offered several roles for plays and then for cinema. His first big success was The Man with the Golden Gun (1974) where he was a killer associated to the villain Scaramanga (played by Christopher Lee). He inspired the TV-series Fantasy Island (1977) where he took the role of "Tattoo", the faithful servant of "Mr. Roarke" (Ricardo Montalban). This series was a great success and, thanks to it, Villechaize became famous and rich, mostly because of his enigmatic and charming smile.In 1983, he argued with the producers of the show in order to earn as much money as Montalban but, instead, he was fired; he also lost his model-actress wife. The series continued without him but stopped one year later, when the media response meter decreased because of the lack of Tattoo's character!Villechaize became alcoholic and depressed, so he missed several roles that he was offered. His health problems also increased (mostly suffering from ulcers and a spastic colon), and he nearly died of pneumonia in 1992. On the afternoon of Saturday September 4th, 1993, after having watched a movie, he wrote a note and made a tape recording before shooting himself in his backyard. His common-law wife, Kathy Self, discovered his body and called the ambulance which took him to the Medical Center of North Hollywood where he died at 3:40 pm. Villechaize was cremated and his ashes were scattered off Point Fermin, in Los Angeles.
حواشی Hervé Villechaize (0 حاشیه)
اضافه کردن حاشیه