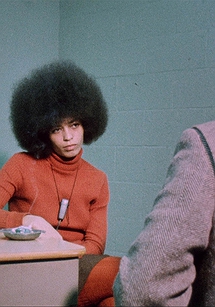 Angela Davis was awarded a full scholarship to Brandais University in Massachusette, where she met German-American philosopher Herbert Marcuse, later becoming his student at UCSD. Together with Herbert Marcuse she participated in a political rally during the Cuban Missile Crisis. At that time she studied Karl Marx, Albert Camus, and Jean-Paul Sartre, and spent summer in Paris and Helsinki, where she participated in the World Festival of Youth and Students. There Davis met with the Cuban students and became a supporter of Fidel Castro and Cuba. Then she continued her studies at the University of Frankfurt, Germany for 2 years, from where she graduated in 1965.

Davis returned to East Germany for her Ph. D. in philosophy from Humboldt University in East Berlin. Back in California she worked as a lecturer at UCLA during the 60s. At that time Davis was a radical feminist and a member of the Communist Party USA and was also associated with the Black Panther Party. She was fired from University of California in 1969, in a controversial decision by the Board, pushed by then Governor Ronald Reagan. She was later rehired to her job.

In 1970, Angela Davis appeared on the FBI's Most Wanted List. She was able to evade the police for 2 months before being arrested. She spent 18 months in the Women's Detention Center in New York awaiting the trial. In 1972 John Lennon and Yoko Ono supported her with their song "Angela" and Rolling Stones recorded their song "Sweet Black Angel" advocating her release. She was tried and acquitted of all charges.

During the Cold War she was hosted by the Soviet leader Leonid Brezhnev. Her name and image were abused by the Soviet propaganda; she was taken to schools, factories, collective farms, where she was shown as a victim of "capitalism" to poor Russian victims of socialism. She was tightly controlled by the agents and interpreters, who were twisting the translation of her liberal words. Witty Russian dissidents also demanded equality and rights to travel to her country's prisons. Davis refused to meet with the real Russian political prisoners.

Aleksandr Solzhenitsyn, a survivor of the Stalin's Gulag prisons, commented: "Angela Davis was set free, as you know. Although she didn't have too difficult a time in this country's jails, she came to recuperate in Soviet resorts. Some Soviet dissidents, but more important, a group of Czech dissidents, addressed an appeal to her: "Comrade Davis, you were in prison. You know how unpleasant it is to sit in prison, especially when you consider yourself innocent. You have such great authority now. Could you help our Czech prisoners? Could you stand up for those people in Czechoslovakia who are being persecuted by the state?" Angela Davis answered: "They deserve what they get. Let them remain in prison. That is the face of Communism. That is the heart of Communism for you."

Angela Davis opposed the 1995 Million Men March because, in her view it promoted male chauvinism. She is currently the Presidential Chair and Professor with the History of Consciousness Department at the University of California, Santa Cruz campus. She is also director of the Feminist Studies department. She stands against the Death Penalty in California and remains a prominent Abolitionist.