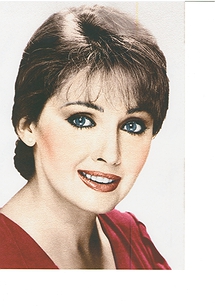 Her graduation parts were Desdemona of Shakespeare's "Othello" and the Countess in "The Marriage of Figaro," a musical production based on the play by Beaumarchais. After graduation she played roles in dramas, comedies and musicals, on stage and in movies. Both professionals and film and theater audiences noticed her flexibility and shining personality. "That girl can play anything", said Andrei Goncharov, the artistic director of the Moscow repertory theatre where Larisa worked. But nothing could compare to the love of the fans Larisa accrued for her film roles. Whatever she played, whether it be drama, comedy or musical, people admired and adored her. She was popular all over the Soviet Union and in Eastern European countries such as Poland, Germany, Czechoslovakia, and many others.

Larisa and her family left the Soviet Union for the United States at the peak of her acting career, having four offers for leading roles in major movies at the time of her immigration. Immediately after arriving to New York, she was offered a contract by one of the most prestigious modeling agencies, and promptly turned it down. In 1980 she and her family moved to Los Angeles, where she has been working successfully in movies and on stage. She also directs, wrights and continues working on enhancing her acting skills. After a stage production based on the play "Between East and West" by Richard Nelson, Silvia Dreik, a famous theatre critic from the Los Angeles Times said "...Larisa Eryomina is an actress of a caliber of Greta Garbo and Ingrid Bergman."