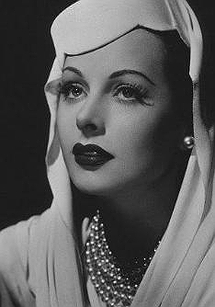 گالری ویدئوی Hedy Lamarr (0 ویدئو)
اضافه کردن ویدئو
آثار شاخص Hedy Lamarr
Boom Town
The Story of Mankind
Ziegfeld Girl
The Strange Woman
Algiers
Come Live with Me
سوابق کاری Hedy Lamarr
اضافه کردن اثر به سوابق Hedy Lamarr
بازیگر (11 اثر)
پنهان شدن
4
The Story of Mankind
رای شما:
0/10
(1957)
0
Samson and Delilah
رای شما:
0/10
(1949)
4
Dishonored Lady
رای شما:
0/10
(1947)
4
The Strange Woman
رای شما:
0/10
(1946)
2.5
Tortilla Flat
رای شما:
0/10
(1942)
0
Crossroads
رای شما:
0/10
(1942)
3.5
Come Live with Me
رای شما:
0/10
(1941)
3.5
Ziegfeld Girl
رای شما:
0/10
(1941)
5
Boom Town
رای شما:
0/10
(1940)
3.5
Algiers
رای شما:
0/10
(1938)
3
Ekstase
رای شما:
0/10
(1933)
مشخصات Hedy Lamarr
مهارت‌ها
پنهان شدن
مهارت‌های فرعی: رانندگی
قانونی و حلال دانلود کنید - بالاترین کیفیت، ارزان‌ترین قیمت مشاهده همه
با خرید قانونی و شرعی فیلم‌های ایرانی، علاوه بر حمایت از تولید ملی می‌توانید در ادامه حیات صنعت تولید فیلم و سریال ایرانی نیز سهمی داشته باشید. علاوه بر این،‌ با دانلود آثار آن‌ها را همیشه در رایانه خود ذخیره خواهید داشت و دیگر نگران گم شدن DVD‌ فیلم‌ها نخواهید بود :)
اکسیدان
قهرمانان کوچک
شنل
شهرزاد 3
مالاریا
ساعت 5 عصر
خفه‌گی
زیر سقف دودی
حقه‌باز دم‌دراز
خالتور
انزوا
عشق و خیانت
بیوگرافی / زندگی‌نامه Hedy Lamarr
Hedy Lamarr, the woman many critics and fans alike regard as the most beautiful ever to appear in films, was born Hedwig Eva Kiesler in Vienna, Austria. She was the daughter of Gertrud (Lichtwitz), from Budapest, and Emil Kiesler, a banker from Lviv. Her parents were both from Jewish families. Hedwig had a calm childhood, but it was cinema that fascinated her. By the time she was a teenager, she decided to drop out of school and seek fame as an actress, and was a student of theater director Max Reinhardt in Berlin. Her first role was a bit part in the German film Geld auf der Straße (1930) (aka "Money on the Street") in 1930. She was attractive and talented enough to be in three more German productions in 1931, but it would be her fifth film that catapulted her to worldwide fame. In 1932 she appeared in a German film called Ekstase (1933) (US title: "Ecstasy") and had made the gutsy move to be nude. It's the story of a young girl who is married to a gentleman much older than she, but she winds up falling in love with a young soldier. The film's nude scenes created a sensation all over the world. The scenes, very tame by today's standards, caused the film to be banned by the US government at the time.Hedy soon married Fritz Mandl, a munitions manufacturer and a prominent Austrofascist. He attempted to buy up all the prints of "Ecstasy" he could lay his hands on (Italy's dictator, Benito Mussolini, had a copy but refused to sell it to Mandl), but to no avail (there are prints floating around the world today). The notoriety of the film brought Hollywood to her door. She was brought to the attention of MGM mogul Louis B. Mayer, who signed her to a contract (a notorious prude when it came to his studio's films, Mayer signed her against his better judgment, but the money he knew her notoriety would bring in to the studio overrode any moral concerns he may have had). However, he insisted she change her name and make good, wholesome films.Hedy starred in a series of exotic adventure epics. She made her American film debut as Gaby in Algiers (1938). This was followed a year later by Lady of the Tropics (1939). In 1942, she played the plum role of Tondelayo in the classic White Cargo (1942). After World War II, her career began to decline, and MGM decided it would be in the interest of all concerned if her contract were not renewed. Unfortunately for Hedy, she turned down the leads in both Gaslight (1940) and Casablanca (1942), both of which would have cemented her standing in the minds of the American public. In 1949, she starred as Delilah opposite Victor Mature's Samson in Cecil B. DeMille's epic Samson and Delilah (1949). This proved to be Paramount Pictures' then most profitable movie to date, bringing in $12 million in rental from theaters. The film's success led to more parts, but it was not enough to ease her financial crunch. She made only six more films between 1949 and 1957, the last being The Female Animal (1958).Hedy retired to Florida. She died there, in the city of Casselberry, on January 19, 2000.
حواشی Hedy Lamarr (0 حاشیه)
اضافه کردن حاشیه
در دنیای اینترنت