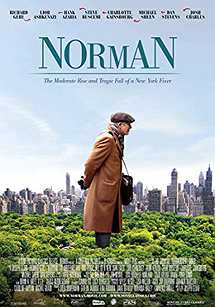 4
Norman
(2016)
Norman Oppenheimer is the President of New York based Oppenheimer Strategies. His word-of-mouth business is consulting work largely in American-Israeli business and politics, that focus due to being Jewish. Most of that work is as a fixer: doing work that others don't want to do and with which they don't want to be officially associated. In reality, Norman is a shyster, and not a very good one at that. His office is comprised of his cell phone and whatever is stuffed in his satchel which is usually slung over his shoulder as he wanders the streets. What he promises is making connections, setting up a meeting between his guy and the other guy. Generally, "his guy" is non-existent, he dropping names of people he usually doesn't know to make connections. A usual tactic he uses is to say that his deceased wife was personally connected to so-and-so, such as being a babysitter, those stories always untrue. All he needs is for one of the people that he approaches to believe a story to build that network. Not so much a story, but an act of kindness with that ulterior motive does eventually pan out as the connection of which he could have only dreamed. He is able to build off that connection to become the toast of the town, a status upon which he tries to parlay into being an even bigger fish in the pond. But the greater his exposure, the greater the potential scrutiny about him as a person, which could bring his fragile network come crumbling down around him.
معرفی Norman
گالری عکس
لیست کامل عوامل
ثبت نام کنید
رمز عبور را فراموش کرده ام
قبلا ثبت نام کردم، ورود به منظوم
ادامه فعالیت شما در منظوم منوط به تایید شماره موبایل است
00:00
ارسال دوباره کد تایید
00:00
ارسال دوباره کد تایید
شماره تلفن را اشتباه وارد کردید؟ بازگشت
یک رمز عبور جدید برای خودتان انتخاب کنید
دوستان خود را دعوت کنید!
به ازای هر نفری که با دعوت شما در منظوم ثبت‌نام می‌کنند 20 امتیاز می‌گیرید.
لینک دعوت:
https://www.manzoom.ir/invite/u/
کپی تلگرام توییتر واتساپ