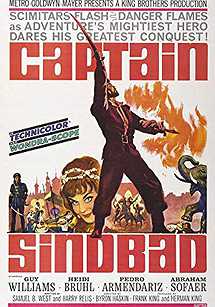 0
Captain Sindbad
(1963)
The peaceful kingdom of Baristan has an evil ruler named El-Carim. He plans to capture his rival, Sindbad, who will soon return from sea in order to marry Princess Jana. The Princess convinces the magician Galgo to turn her into a small bird, so that she may fly off to warn Sinbad of the trap set against him. She flies off just as Galgo is discovered by the guards, who take him to El-Carim. As Sindbad and his crew sail towards Baristan, the Princess-Firebird descends and lands on the ship. But before she can deliver the message, El-Carim transforms the guards into giant human falcons, to drop rocks onto Sindbad's ship sinking it. However, Sindbad and some of his crew have survived, and they carefully make their way to shore. Galgo makes his arm stretch out to an enormous length, long enough to grab El-Carim's magic ring, but the evil king wakes up in time to burn Galgo's hand. Sindbad manages to get arrested, and soon appears before the dictator as a petty thief. El-Carim is not fooled, and knows that the man standing before him is the Princess' suitor, and orders him executed. However, Sindbad breaks free of his ropes and challenges the ruler. Sindbad stabs the King in the heart with a sword, but as El-Carim has no heart, and cannot be killed. El-Carim plans to put Sindbad to death the next day in the public arena. Soon, the poor prisoner is tossed into the arena, where he must do battle with "The Thing," a fearsome giant invisible monster. Fortunately, the Thing knocks over a torch, starting a fire in the arena which incites a mass exodus, allowing Sindbad to escape. Sindbad visits Galgo, finally convincing the magician to reveal the secret of El-Carim's invincible rule: the madman has had his heart removed, and it is kept safe in a distant bell tower, guarded by supernatural forces. El-Carim insists that the Princess marry him, but she refuses, and so is slated for execution. Sindbad and his men traverse the swamps of horror in order to reach the tower of the evil heart. They encounter carnivorous vines, giant prehistoric monsters, volcanic lava pits and whirlpools on the way, finally battling an ogre with the multiple heads of a dragon. Outtakes of this "Dragon-Ogre" where used briefly in the movie "Natural Born Killers". When they reach the tower, Sindbad, with the aid of a hook, begins to climb the immense rope to the top of the tower. Sindbad reaches the top of the tower, and finds El-Carim's beating heart encased in crystal. The heart is protected by a giant hand, which chases Sindbad all around the bell tower. Sindbad throws the hook at the crystal, which dislodges the evil heart, giving El-Carim a heart attack. Sindbad then manages to vanquish the monster hand. Seeking to protect the heart, El-Carim flies in a winged chariot towards the tower, accompanied by Galgo. Sindbad is about to impale the evil heart when El-Carim arrives on the scene. The two have a fierce swordfight while Galgo steals the wretched heart, and tosses it over the side of the tower. As it falls to the ground, El-Carim faints, and falls to his death. The entire kingdom then has a celebration for the marriage of the Princess and Captain Sindbad.
معرفی Captain Sindbad
گالری عکس
لیست کامل عوامل
ثبت نام کنید
رمز عبور را فراموش کرده ام
قبلا ثبت نام کردم، ورود به منظوم
ادامه فعالیت شما در منظوم منوط به تایید شماره موبایل است
00:00
ارسال دوباره کد تایید
00:00
ارسال دوباره کد تایید
شماره تلفن را اشتباه وارد کردید؟ بازگشت
یک رمز عبور جدید برای خودتان انتخاب کنید
دوستان خود را دعوت کنید!
به ازای هر نفری که با دعوت شما در منظوم ثبت‌نام می‌کنند 20 امتیاز می‌گیرید.
لینک دعوت:
https://www.manzoom.ir/invite/u/
کپی تلگرام توییتر واتساپ